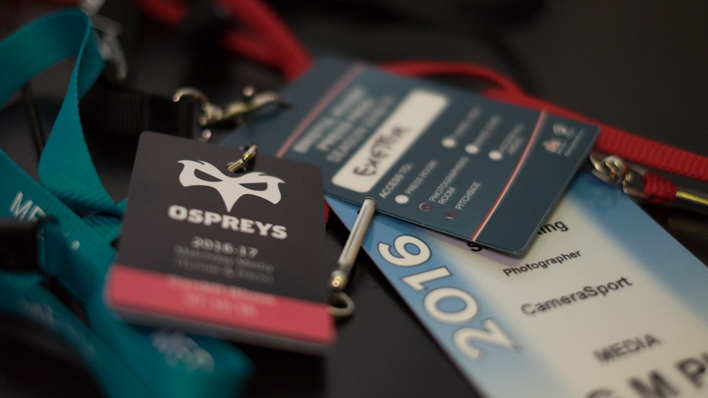 As with the image above you can see the shock on the French Scrum Half’s face as they lost to Wales during the Women’s RBS Six Nations. France were favourites for the title but got a surprise in Neath that day. They did go on to win the Championship on the final day.

Here George North is roaring with delight before scoring during the Wales v Italy game in the Mens RBS Six Nations, although Wales won with plenty to spare there is no doubting the pleasure in scoring for your country!

At the end of a tight game between Saracens and Wasps in the EPCR Champions Cup Semi Final Will Fraser let out a roar of delight at the result.

Ospreys won the bragging rights during the Judgement Day fixture against the Cardiff Blues with James King crossing the try line just in front of me. One of those rare moments when I was pretty much on my own as most other photographers has chosen to sit at the other end.

Sometimes it is not just the action or emotion but the sheer magnificence of a stadium that makes for a good image. A packed Principality Stadium, with the roof open and blue sky make for a pretty impressive scene.

During the Aviva Premiership I spotted Exeter Chiefs’ Jack Nowell pointing in a way that reminded me of the famous Lord Kitchener poster from World War I. I knew the image would make a strong Black and White photograph so I converted it to monochrome and edited to my taste.

I love Cricket but hadn’t had the opportunity to cover any International games until this year so my first foray was for the ODI match England vs Pakistan. Here Sarfraz Ahmed makes an impassioned appeal to the umpire but to no avail on this occasion.

It’s always good to see a classy innings and Ben Stokes provided that with a magnificent 50, but it wasn’t enough as England went on to lose, although they won the series.

Sometimes it’s good to capture a fleeting moment and Ospreys’ Jeff Hassler looks down the field over the ensuing scrum.

I was lucky enough to photograph Australia v Argentina during the 2015 RWC at Twickenham. So when the opportunity came to photograph the two teams during the Rugby Championship in a one off fixture at Twickenham I jumped at the chance. This image shows Agustin Creevy looking on in anguish as he knocked on jus shy of the try line. At that point the game was nip and tuck and proved crucial. After that moment Australia took control of the game and won with an interception try.

Australia were too strong for Wales in the first Autumn International at the Principality Stadium, Bernard Foley looking delighted as he scored his sides fourth try!

I love International matches people make more effort and wear fancy dress costumes, before the warm up or the action starts I always go for a walk around the local area to get stadium shots and fan shots. Before the Wales v Argentina I went out as usual and as I took pictures of the stadium saw this hoard of oompa loompas heading towards me. I approached them and asked if I could take a group photo in front of the stadium. The lads were on a stag do from Cirencester with the stag dressed as Willy Wonka. This is without doubt my favourite fan shot of all time!

Sometimes there is a break in the action and you take that opportunity to look around, during the Wales v South Africa game I saw this young lad with his face painted, a sheep hat and Wales flag rise up on his dads shoulders. A memorable day for the lad as Wales comfortably beat South Africa and ended a decent Autumn with three wins from four.