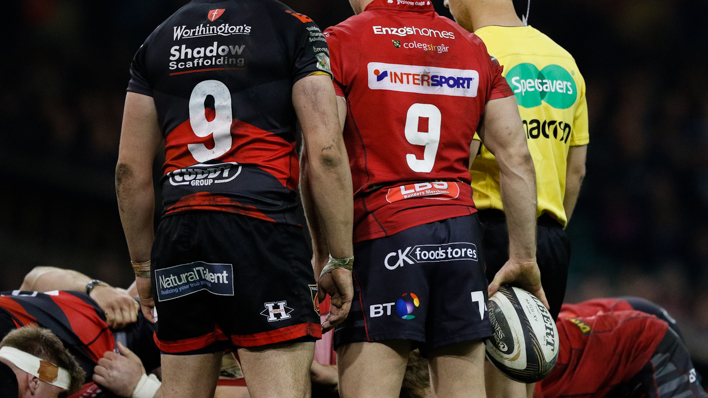 It took a while to get back into action and I photographed some Vitality T20 Blast games at Somerset and Glamorgan. After that it was back into the Pro 14 along the way we have undertaken some commissions for Inpho for Pro 14 and the Celtic Cup. Additionally Replay Images started providing images to Dai Sport and Firepower Sport and gained access to some of the Wales Autumn Internationals. Finally Replay Images have been appointed as Club Photographers for West Wales Raiders, Wales’ Premier Rugby League side.

The following photographs represent some of my favourite images from the last twelve months. Hopefully 2019 will allow us to continue with the progress Replay Images have made in such a short space of time.

It’s not just the players that are worthy of a photograph, here is one of Nigel Owens pulling a face whilst watching a replay on the big screen during a local derby between Ospreys and Cardiff Blues.

Alun Wyn Jones is an outstanding player but also provides some of the best facial expressions!

Pre match warm up pictures are usually the opportunity to photograph coaches, player images are rarely of any interest. But this one caught my eye with Mako looking focussed whilst what looks like a medieval torture implement is used.

During 2018 I started experimenting with having a remote camera setup to be triggered from another camera. Some games bear little fruit from the approach but once in a while you get something worth posting.

This one from the Champions Cup game between Ospreys and Saracens show Maro Itoje claiming the line out from Alun Wyn Jones as Liam Williams looks on.

Another one for great facial expressions is Maro Itoje here seen tussling with Justin Tipuric.

Scarlets had one of their best runs in the Champions Cup for a long time and sealed their place in the quarter finals against Toulon. Here Hadleigh Parkes dives in to score his sides second try.

Showing just what it means to win against Toulon Leigh Halfpenny roars with delight at the fans in a packed Parc y Scarlets.

Always nice to capture a diving try and Owen Lane delivered in a win against Munster in the Pro 14.

Once again Alun Wyn Jones provides a photographic treat as he complains that his shirt was being tugged at a maul.

Sometimes a brilliant tackle makes a great image such as this one where Nick Griggs tackles Hadleigh Parkes at full tilt.

Sometimes ground views make for a good photograph. Cardiff Blues eventually won the Challenge Cup competition, this image is from the semi-final against Pau.

Seb Davies put Gareth Anscombe in for a score that helped close the game out.

Ellis Jenkins is congratulated by team mates after a turnover that killed a Pau attacking move.

Judgement Day in Wales is always great for spotting characters, here a Scarlets fan is enjoying a pint outside the City Arms near the stadium.

Normally I wouldn’t press the shutter when the principle players have their backs to me. But in this instance, with both 9s and the referee I felt it told a story as they wait for the scrum to form.

This image amused me as Steff Evans signals that he scored a try in the Judgment Day game.

I have no idea what Dan Evans actually said to Jeff Hassler, but as it was Jeffs last game for Ospreys I thought he might be asking him not to leave!

Cricket is a different challenge to the oval ball game, but equally gratifying when an image works. The clear delight in Peter Tragos face when he dismissed Michael Klinger is a joy.

Later Peter Trago is also there at the end of the match to help seal the win for Somerset.

For me this is one of my overall favourites from the year as Aneurin Donald takes a catch against the blackened sight screen.

This photograph shows the drama that can unfold in a cricket match with an attempted run out ask Kieran Carlson dives to make his ground.

Back to rugby and the start of the 2018-19 Pro 14 season, during the warm up Cory Hill of Dragons was working with the pack to practice lineouts. As it was a bright evening I chose to set up the camera so that he was in silhouette against the bright sky.

Suffering their first loss of the season to Benetton Treviso, Cory Hill of Dragons shows his frustration.

As the sun sets over Rodney Parade the stadium looks stunning.

That moment when you miss a tackle and your opponents go on to score.

A moment of reflection for Phil Price of Scarlets as he reads the match programme before the team head out for the warm up.

Some coaches get stuck in as Kieran Crowley clears up the tackle pads after the warm up.

Tommaso Allan of Benetton scores a bonus point try and takes the lead against Scarlets.

Having just conceded a fourth try Ken Owens reads the riot act to his team mates. It must have worked as Scarlets score two tries afterwards winning the game.

An image that struck me as Ray Lee-Lo of Cardiff Blues shows his athleticism wrong footing Darren Sweetnam of Munster.

One of the privileges of photographing games is getting some of the behind the scenes images. Here is the Cardiff Blues dressing room at Rodney Parade for the local derby.

Blues players arrive at Rodney Parade and head towards the dressing room.

That feeling when you score the winning try against your local rivals.

Richard Hibbard of Dragons having a bad hair day.

On a cold night it’s best to be in the forwards where at least you get to keep warm!

Elliot Dee of Dragons disappointed with the loss to Northampton Saints in the challenge cup.

Glasgow Warriors were just too strong for Cardiff Blues in the Champions cup match at Cardiff Arms Park.

Ospreys normally play their home games at Rodney Parade but for the first time they played a Pro14 game at the Brewery Field in Bridgend. The pyrotechnics made for a great image.

Although not playing in the game, as he was recuperating, Stuart Hogg warms up with the team.

Unfortunately for Ospreys the Glasgow Warriors were in fine form, and Nick Griggs dives to score the bonus point try.

Although I didn’t get accreditation for the first Autumn international I was privileged to attend the second game Wales v Australia. For international matches I like to get creative outside of the stadium.

For me the Principality Stadium is the best for Rugby and the was the light falls onto the line out here demonstrates that beautifully.

Although the game was try-less there was plenty of action as we seem Samu Kerevi escape the clutches of Hadleigh Parkes.

This one appeals to my sense of humour as Alun Wyn Jones wonders why Adam Coleman of Australia is on the Wales side at the Maul.

Sometimes a rugby photograph looks like a renaissance painting, this is one of those times as Liam Williams and Will Genia go for the high ball.

This is the moment that Wales finally put the hoodoo of Australia to bed as Dan Biggar scored the winning points.

Ross Moriarty shows what it means to have beaten Australia!

Wales v Tonga was close for a while as Steve Mafi scores his sides second try.

The next two images show that moment when the remote camera finally pays off as Tomos Williams scores his sides fifth try. The first is from the side on a remote camera.

This is the exact same moment caught head on and provides a different perspective.

In the second half Wales took full control and Cory Hill shows his delight scoring the sixth try for Wales.

Rhys Patchell was so pumped to score that he launched the ball towards the crowd. Unfortunately he hit a steward and immediately apologised.

Siya Kolisi shows what it means to play for your country as he sings the national anthem.

After the game and a first clean sweep for Wales the players show their appreciation and applaud the fans.

After the Autumn Internationals I worked on a brief for Dai Sport where they were writing a story on Tesni Evans (ranked 9th in the world at Squash). Whilst I was there I took the opportunity to photograph some the action here Emyr Evans is in action for the Welsh Wizards.

The brief was to photograph Tesni and capture a slightly moody look. Dai Sport were delighted with the results and used a number of the images for the article.

Back to the Rugby, Dragons hosted Leinster at Rodney Parade and suffered a heavy defeat. Dave Kearny opened the scoring for Leinster.

Saracens came to Cardiff for the return Champions Cup match on a very wet afternoon, the squad huddle in the deluge before warming up.

A Jamie George try killed off the game as Saracens came back in the second half.

Sometimes the fans make the picture as an Ospreys supporter pulls a face for the camera.

Not necessarily the greatest image but highly poignant, on paper Ospreys should have comfortably beaten Dragons. But at the end of the first half I had a decision, swap ends and stick with the Ospreys attack or stay where I was for the Dragons attack. I felt there was something not firing with the Ospreys and went with my gut. Elliot Dee scored his sides second and final try setting Dragons up for the win!

The final score in the final match (for me) of 2018 and an upset as Dragons finally win a Welsh derby match.