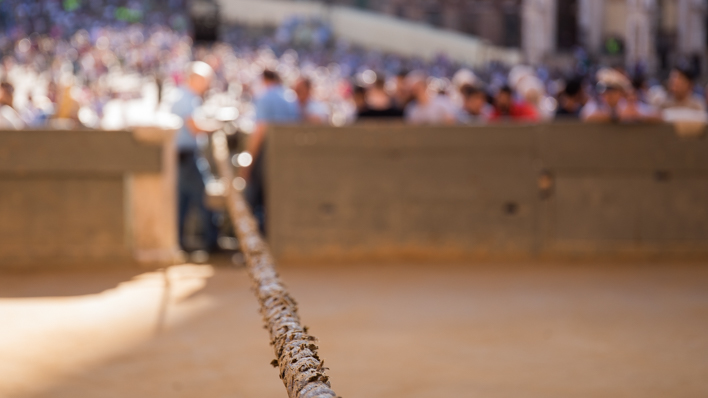 The Palio – An outsiders view August 2017

Siena is a beautiful city, a jewel in the crown of Tuscany, even without the Palio it is a place I would visit over and over. With the Piazza del Campo, Palazzo Pubblico, Duomo, beautiful winding streets, the list goes on. But the Palio is the lifeblood of the people there and makes it a uniquely magical destination. I was lucky enough to spend time in Siena during the August 2017 Palio (the race is also run in July) to experience and photograph as much of the event as I could. I learnt a lot in those few days and gained more than a collection of photographs.

Firstly, the Palio is a unique event, certainly there are other events around the world that enact medieval pageants or provide excitement through sporting endeavour. But the first thing to note is that the Palio is not “enacted” for tourists as explained to me by Stefano Marini (Priore of Contrada della Selva) it is for the people of Siena. Certainly, the event draws in tourists from around the world, but if they did not come it would still take place. Unlike other significant “Historical” events, such as the Boat Race in the UK between Oxford and Cambridge Universities, the Palio and its protagonists are not festooned by sponsor logos, the Palio is funded by the people of Siena. In that sense, it is a pure and unsullied event that needs to be kept that way. In some ways, it feels wrong to be sharing photographs and writing about something so precious. The people of Siena aren’t trying to keep the Palio to themselves but they want us to know they don’t need us for it to happen. One other thing that contributes to the uniqueness is that there is no public betting on the outcome of the race.

I have watched the Palio film and whilst I think it is a beautiful piece of cinematography my view is that it doesn’t capture the spirit of the city. The film seems to come more from the perspective of the Fantini (Jockeys) and portrays them as hired assassins. For me, having spent a small amount of time with Contrada della Selva, I felt that there is so much more to it. A Contrada is a district within the city, more than that a community. Contradaioli (district members) gather all year round not just for the Palio itself but meet regularly in their community hall. As explained by Stefano they look out for each other and help in times of need. The Palio is what binds them together but something more precious keeps the bonds strong, The Palio is the spirit of Siena and the people of Siena.

Each Palio takes place over a four day period with a number of events on each of the days.

Presentation of the Horses

A selection of horses are paraded in the Piazza and are checked by veterinarians before being taken into stalls inside the Palazzo Pubblico. Many people are present for this making notes, this includes captains and barbaresco for the contrada.

Once the horses have been presented they are trialled around the track in the Piazza in groups of up to 7 each group running three laps around the Piazza. This gives the captains the opportunity to see how the horses perform on the track and how they cope with the environment. For this trial the Fantini are dressed in the colours of Siena (mostly white with some black).

Allocation of the Horses

The captains of the contrada select 10 horses from the initial group to participate in the race. Here they will select horses that are not the best and not the worst but somewhere in between. This may seem counter intuitive to the casual observer, but as the horses are allocated to contrada by lot means that your rivals don’t get the very best horse.

Once the 10 horses have been selected officials and Contradaioli gather outside of the Palazzo Pubblico. Horses and contra are drawn from two drums and allocated to each other. If a contrada gets what they think is a good horse there are cheers from the crowd, if the horse is deemed not so good it is very quiet. When the horse has been allocated it is escorted back to the Contradas stable, outside of the Piazza, by the Contradaioli. Following this the contrada will look to contract the services of a Fantino (jockey) to represent them for the race.

In the evening after the allocation there is the first trial where the Fantini are dressed in the colours of the contrada they are representing. Before the race the Contradaioli gather near the stables to escort the horse and Fantino to the Piazza.

An order for the horses has been determined and they are called one by one to line up for the start. The 10th horse is known as the Rincorsa (run-in), this horse starts the race on the outside by running past a first rope. Sometimes the start is deemed as a false-start and has to be restarted.

After each prova has completed Contradiolo gather by their horse and slowly proceed out of the Piazza stopping periodically as each Contrada exits via San Martino.

On the second day there are a further two trials one in the morning and one in the evening. The morning trials are less well attended whereas, for the evening, trials the Piazza is full.

The evening trial known as the Prova Generale. This is a full blown trial preceded with a charge of the Carabinieri.

After the trial in the evening Contradaioli gather for a meal hosted by the captain where there are speeches by the Captain, Priore and Fantino. During the meal there is much singing and camaraderie amongst the Contradaioli ahead of the final day.

Mass for the Jockeys

Early in the morning there is a gathering outside of the Palazzo Pubblico where the cardinal and priests of the competing Contrada give mass for the Fantino. The Fantino are present with the Captains and Priore of the Contrada.

After the mass a final trial is run in the Piazza, this is known as the trial of indifference; the Contradiaoli mostly stay away, possibly because of a heavy night before and probably because there is more important business to attend to later.

Benediction of the Horse and Jockey

Before the final race the Contradiaoli gather at their church so that the priest can give benediction to the horse and Fantini. This leads to the horse being taken into the church whilst hush ensues. The priest exhorts the Fantini and Horse to “go and return victorious” at the top of his voice.

The Contradiaoli gather outside of the church whilst the flag bearers give an exhibition before marching through the streets. The march stops at various points to pay hommage to the major institutions of the city and ends at the Duomo. During this time the Contrada drummer is beating out a rhythm for the Contradaioli to march along with.

To signal the start of the pageant the Carabinieri carry out a charge around the Piazza. All 17 Contrada parade around the Piazza in full medieval dress with the flag bearers stopping at pre-determined points on the track, paying homage authorities attending the event.

The Fantini for the competing Contrada are dressed in finery and the horse paraded behind the cortege. Following this the non-competing Contrada come through. Once all 17 Contrada have passed through the Piazza the Palio (Drappellone) itself is paraded, drawn by white oxen on a carriage.

Once the Palio has been paraded it is hoisted at Mossa for all to see.

On the final lap, if the winner is clearly ahead, they will start celebrating and Contradiaolo from the winning Contrada will start to pile onto the track to celebrate. The winning Contrada escorts the Fantini and Palio (Drappellone) to the Duomo (for the August Palio) where they celebrate; some Contradiaoli will have a baby pacifier in their mouth which is symbolic for them.

I would like to thank the following for their help and support in being able to understand and photograph the Palio in August. Whilst I am by no means an expert I have a much better understanding of everything than I did in July.

I strongly recommend that you subscribe to ilpalio.org which is published in both English and Italian, the website is run by Orlando Papei and Fabrizio Gabrielli. Fabrizio has helped me immensely in both being able to attend the Palio and enlightened me in many aspects of this magical event.

Also see my photographs from the July Palio for 2019 Link

If you have enjoyed looking at my photographs, in recognition of the help and support I have received from Contrada della Selva, I would be grateful if you could contribute in any small way to their campaign to raise funds for the Contrada Church. The campaign link is here https://igg.me/at/SaveTheChurch any contribution would be gratefully received.

All photographs in this blog have been taken by me and are subject to copyright.