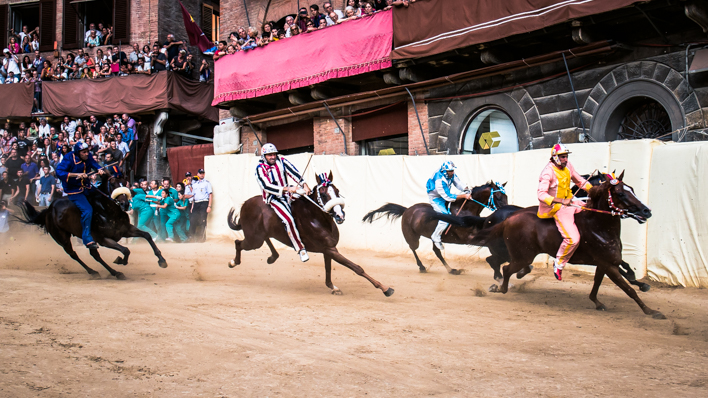 On 2nd of July and 16th August each year the Palio race is held at Piazza Il Campo between the 10 of the 17 contrada of the city. The event is so much more than the race with events in the days leading up to the race and a historical pageant featuring all 17 contrada. I planned to attend the event on 16th August and duly arrived in Siena early in the morning and after taking time to familiarise myself (again) with the Piazza settled on the best spot for me. After several hours waiting with many others the organisers let everyone know by hoisting a green flag to announce that the race would be postponed.

The race was last postponed in 1980 some 35 years ago. So I resolved to return the following day and take up the same spot. However, I arrived at 10 am and found that the spot I wanted was already occupied (the race starts around 19:30!). I chose another spot and set in for the day, after a nine hour wait I was rewarded with the race itself an experience not to be missed.

The following set of images are taken from both days I hope that you enjoy them as much I enjoyed the day!